International PR success in the Times of India

Having recently been hired by IBB to promote the region’s technology cluster in overseas media, we were asked to use the recent VR World Congress in Bristol as a hook. As one of the largest most technically literate nations in the world, the Indian market was identified as a key objective. Never shy of a challenge, the team at Imp got to work. 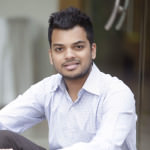 We already possessed a working knowledge of the Indian media landscape, but we knew enough to know we would want expert help. Expanding the team to include a new Imp with relevant experience was vital. After an extensive search we found the perfect person, Niren Yadav in Delhi. Niren not only has the open-minded sense of fun we look for here at Imp, but he is also an experienced player in the Indian PR scene. He has worked for several agencies in Delhi including the local office of Ogilvy.  With Niren’s help we were confident we at least had a good shot at good coverage in India.

Every international PR effort has its own unique challenges, though. Among the ‘must haves’ Niren identified for us was a strong connection between the VR World Congress and someone or something from India. At first we simply assumed this would be straightforward to find. Among India’s huge software development community, surely someone would be involved in VR World Congress? Virtual Reality is pretty much the hottest technology scene at the moment, and the VR World Congress is one of the industry’s premier events.

We were utterly wrong it turned out. Not only were there no exhibitors or speakers from India coming to the VR World Congress, but there were not even any attendees. This was decidedly odd as two other BRIC nations, China and Russia, were both represented by companies exhibiting at the VR World Congress ‘expo.’ And Brazil, arguably the least technologically focused BRIC economy, had been represented by superstar VR game designer Ana Ribeiro at last year’s event.

Despite our best efforts (and the patient forbearance of the VR World Congress organisers) we were unable to turn up any connections to India. Our attempt to get international pr in India appeared doomed. 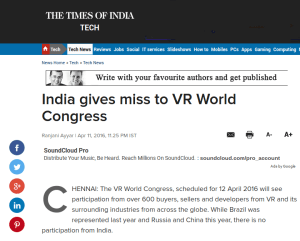 Until, in classic Imp style, we turned the story on its head. Why was no one from India attending? Why was India the only BRIC nation, despite its heritage as a computer programming superpower, not involved in the top European VR conference of the year?

Thanks to a lot of creative thinking, and an impressive amount of hustle from Niren in Delhi, we not only managed to place the story but get it in India’s most prestigious publication: The Times of India.

With a circulation of over 3 million daily copies of the print edition, the TOI is easily bigger than any UK publication by a substantial margin. Not only that, it is the largest English language newspaper in the world by circulation.

Placing any story in the TOI is a triumph, but we were pleased IBB’s key message – that Bristol & Bath are the European capital of VR – featured prominently in the story.