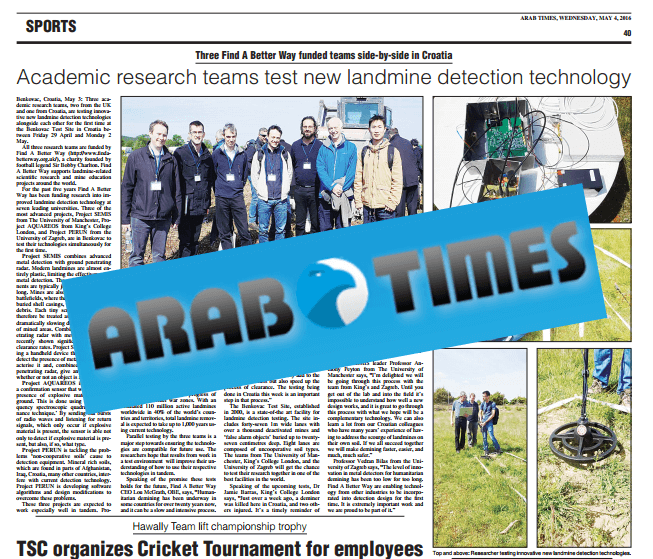 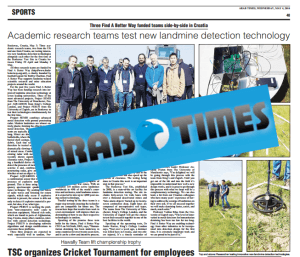 Find A Better Way, the landmine charity founded by Sir Bobby Charlton, had a huge Middle Eastern PR smash hit this week thanks to a half page in Kuwait’s prestigious Arab Times.

It was the first time an Imp Communications client had been placed in a Middle Eastern publication, and we were delighted to get off the mark with such an influential title.

This was all due to the skill and hard work of one of the newer members of the Imp team, Ana Milojevic. Although a resident of her native Belgrade, Ana has lived much of her life in Kuwait and has a thorough knowledge of the Middle Eastern PR scene.

This particular PR campaign was always going to be a challenge. Find A Better Way, among other activities, fund landmine detection technology to make the clearance of mines faster, cheaper, and safer. Sir Bobby founded the charity five years ago this year, and three of the research teams were coming together to test alongside each other at the Benkovac Test Site in Croatia. The background to the story was strong, and the fact that the three teams were working together for the first time was crucial, but we knew the story would be a hard sell to the UK’s science and technology journalists. This was simply ‘testing,’ not even a formal trial or field test. There would be no hard results to throw up – it was just an interesting moment in a long process.

The world is full of science and technology journalists outside the UK, of course, and journalistic preferences vary from country to country. Having a team with the experience to understand each market they operate in gives Imp a huge advantage. 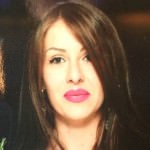 Knowing Middle Eastern PR as she does, Ana was able to spot that this story had a good chance at getting coverage. She also knew which publication would be the best place for an internationally focused charity like Find A Better Way to appear: the Arab Times.

Founded in 1977, the Arab Times was Kuwait’s first English language newspaper. It remains highly influential not only in its native country, but around the entire Persian Gulf. In the early stages of planning the campaign, Ana marked it out as the top goal for our Middle Eastern PR efforts.

We were not only focussed on Middle Eastern PR, of course. We pitched the story to journalists around the world, even though we knew our chances of getting coverage in most markets were low. Find A Better Way will have many stories in the future that will tick all the right boxes, so getting on the radar screens of journalists is an important part of advance preparation for those stories. This story gave us a chance to introduce Find A Better Way, and we were delighted to have lots of positive feedback, including from science journalists at top UK broadsheets.

But Ana correctly identified a chance to get Find A Better Way top coverage even at this early stage. By seeing past the immediate details of the testing, Arab Times journalists were able to inform their readers about the fascinating world of landmine detection research. And anti-tank mines were deployed widely during the first Gulf War, so the subject was an especially relevant to Kuwaitis.

And in all honestly, as we are conditioned to the UK PR market back at Imp Towers, we would have been content just to have a chance to use this piece to open a dialogue with journalists. It took Ana’s local insight to spot the opportunity, pitch the story in a way that suited Middle Eastern PR, and follow up with journalists. We are delighted she took the initiative, and are looking forward to many more Middle Eastern PR successes in future!